Beersbee-How To Make It and Rules Of Play

Many people like to play drinking games and beersbee is a fun one. Mostly played by collage kids, this backyard game can be enjoyed by many adults. It makes for a fun time here at home when friends and family are over. Beer Frisbee can be played as a non drinking game as well but it is not suggested for young kids.

In this Lense, we are going to go over how to make and go over the rules of Beersbee.

I personally first found out about this game a couple years ago the same place I usually find them, at a party! It was on Halloween night and we played for hours. I decided to make a set for us to play since we have a lot of parties that include adult beverages 🙂

If you would like to see a nice set for sale,

here is one on Amazon. 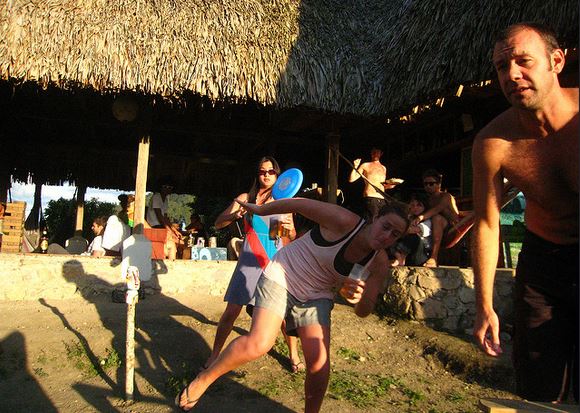 What You Will Need to Make Beersbee

You will not need much to make Beer Frisbee. A quick trip to the hardware store should get you everything you need. 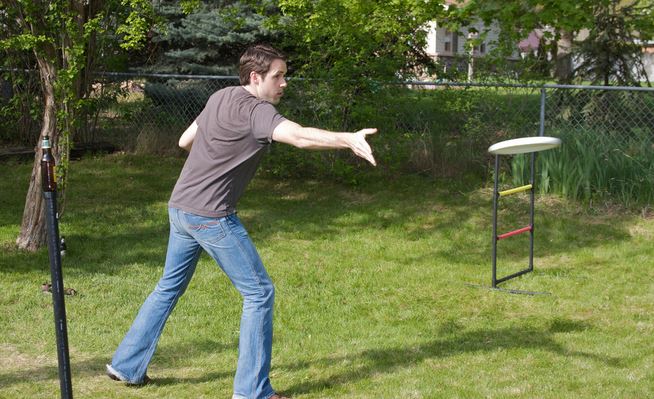 How to make the frisbee beer bottle game

Amount of players 2-4 (the more people, the more fun!)

Object of the game – You are NOT awarded points by knocking your opponents beer bottle off of their pole. You only give the opposing team points if you FAIL to catch either the beer bottle or the Frisbee on a catchable throw they have made!

Before beginning this game, it may be helpful to cut one end of each PVC pipe at an angle. This allows it to be placed in the ground more easily.

One tip is to attach a small flat platform to the top end of the poles that are stuck into the ground. It will make steadying the bottle on top much easier. This is the hardest part and why many people end up

just purchasing a set. You do not need this part added but it does make it easier.

How to play the game

Step one
Everyone get a beer!

Step two
Place one end of the PVC pipe in the ground, pushing until it is firm and able to stand on its own.

Step three
Ceremoniously place a beer can or bottle on top of the PVC pipe.

Step four
Place the other PVC pipe in the ground approximately thirty feet from the first pipe. This distance should be a comfortable “Frisbee throw” distance. You may adjust it closer or father.

Step five
Ceremoniously place a beer can or bottle on top of the PVC pipe.

Step six
Gather your team and stand near a PVC pipe. Your opposing team stands near their PVC pipe and faces you. You are now in your “zone”. Remember, don’t stand in front of your pole when you throw, only beside it!

Step seven
Make sure everyone has an open beer in their hand!

Step eight
The first team begins by throwing the Frisbee. You only get one throw at a time. Aim for the opposing teams’ pole and beer bottle.

Step nine
As the opposing team is throwing, your team has a job also – You will defend!

Each team takes a turn throwing / defending.
If you are caught without a drink in your hand, watch out!

Defending – You cannot interfere with the Frisbee hitting the pole or the bottle on your teams’ side. Your job as Defender is to catch the beer bottle before it hits the ground while, at the same time, catching the Frisbee!

While defending, no beer can be spilled! 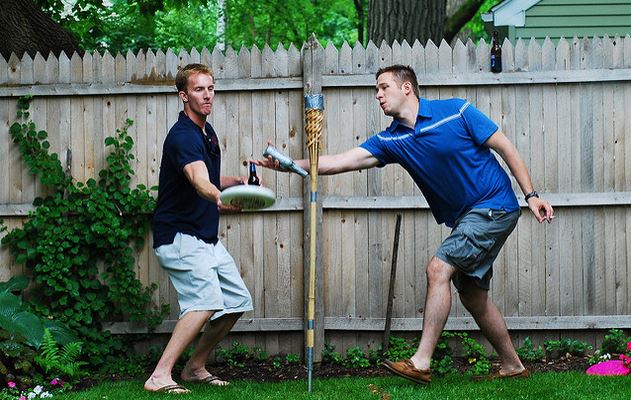 Remember, you don’t get points for throwing! You give the other team points if you fail to catch either the beer bottle or Frisbee when they make a catchable throw at your pole and beer bottle.

Game is played until one team reaches 21. You must win by two points

3 points = if caught with no drink in your hand!

Notes: If you are hardcore, you can replace keeping score and turn those points into drinks of beer. Last one standing wins!

Beer Frisbee (A.K.A. Beersbee) is a great game to play while tailgating, 4rth of July, Memorial Day or during any other backyard party! I know we enjoy it almost as much as Cornhole and Giant Jenga!

If you like drinking games, I’m sure you will enjoy this one as much as I do!


Categorised in: Blog, Other games