I learned of life size Jenga, also known as giant Jenga, while on a job in the Turks and Caicos Islands at a local watering hole one night. My co-worker and I played this game and we were both hooked.

I decided to make my own and found it very easy so I decided to create this article to pass it on to others. I really think you and your friends will enjoy it.

Jenga is known as a boring table game and not many people know about the life sized version. That’s too bad for them because this giant outdoor game is one of my favorites. It can be played as a drinking game, as an adult version or just with the family. It makes for a fun Friday night.

Here you’ll find how to make a giant Jenga game for just the cost of the wood, learn how to play it, and even get some tips on how to dominate the game.

If you have questions on your project feel free to ask in the comment area below. Share how it turned out when you get done. Here are some pre-made sets on Amazon if you don’t want to build your own.

Before we can build it, we will need to make a trip to the local hardware store to pick up a couple things. You might already have the tools. If not, this project can turn into an expensive one.

Okay, now that we have everything we need, let’s get to it! 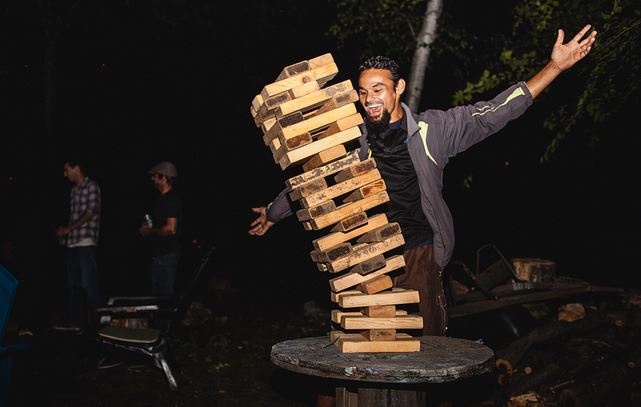 Make the game stand out! Take some of the boards and a marker and write “dares” or some kind of funny task on them. If you are frisky you can even write some adult tasks!

A commenter named Christopher suggested using a coat of minwax finishing paste on your finished boards. I have not personally used it before but he said it helps a lot with getting the boards to slide easier.

Painting or Staining the Set

You also have the option of staining the boards to give them some color. Although it isn’t a traditional Jenga style or recommended, you can stain or paint the wood pieces. If you do, make sure to use a thin coat and something that will not get sticky.

It might also be a good idea to sand it down afterwards. Again, this is just an option and we do not suggest it, but some like to have some color. We would hate for you to put all this work into making your giant Jenga set and have it not work smoothly. You can use the minwax finishing paste over your paint or stain, which I would think would help out.

There you go—you have a giant life size Jenga set! Now call some friends over, grab some drinks and have some fun. I assure you that your friends will think you are a genius for thinking of this great outdoor game. 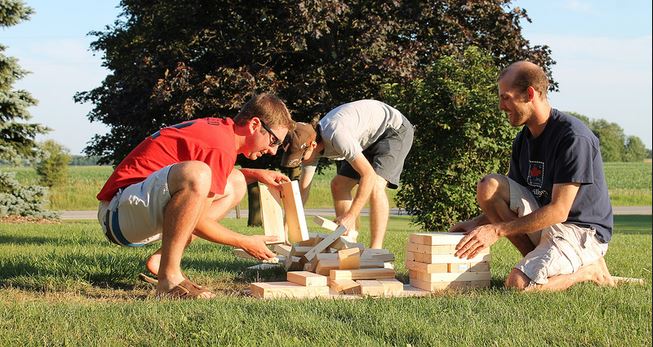 So you now you have life size Jenga set and need to know how to play. You are in luck! We are going to go over the rules I was taught in the Turks. These rules were accepted by the regulars that play every Wednesday night.

This is a very fun game that can be played with as many people as you like. People might first look at you like you’re crazy but when you tell them about it, I bet you by the end of the first game, all the guests will be having a blast.

This can be played as a wine party game, a backyard get together, or even a tailgating or camping game.

I hope you enjoy it. Let me know what you think in the comments below.

Here is a funny video I found of the cast from The Big Bang Theory playing the game. Funny show and good video.

How to Make Jenga More Fun
Most people get bored playing Jenga two or three times within a month. This...
Jenga Reloaded
Anyone can play Jenga all day without complaining about the woes. It’s a cl...
How To Beat Anyone At Jenga?
Jenga is one of the most loved games. Anyone who has ever played this game ...
Backyard Party Games - Ideas For The Whole Family
Backyard Party Games If you have outdoor parties either for the 4rth...
Tags: giant jenga, Giant Jenga Rules, how to play jenga, life size jenga, make life size jenga